Donegal (pronounced: Dún na nGall) is a town in County Donegal, in the Province of Ulster, in Ireland. Donegal is not the county town (capital) of County Donegal, despite being its namesake.  Donegal town is situated at the mouth of Donegal Bay, on the River Eske and is overshadowed by the Bluestack Mountains. The Irish name translates into English as Fort of the Foreigners (Vikings).
There is evidence for settlements around the town dating back to prehistoric times including the remains of round forts and other earth works. There is a record of an early Danish fortress being destroyed by Muirchertach MacLochlainn, High King of Ireland in 1159. This Viking settlement is possibly the origin of the town's name.

Donegal Town itself is famous for being the former home to the O'Donnell Clan, who played a pivotal role in Irish history. From the 15th to the 17th century, they provided the main opposition to the colonisation of Ireland by England. The town itself contains Donegal castle, on the banks of the River Eske and the remains of a Franciscan abbey which dates back to the 15th century on the Southern shore of the Bay. The Annals of the Four Masters are traditionally thought to have been started in the abbey in the early 17th century. The story of Red Hugh O'Donnell, Lord of Tyrconnell, was the inspiration behind many books and films, not least, Disney's The Fighting Prince of Donegal (1966).

After the Flight of the Earls in 1607 the castle and its lands were given to an English captain, Basil Brooke, as part of the Plantation of Ulster. Brooke carried out major reconstruction work and added a wing to the castle in the Jacobean style. The current plan of the town was also laid out including an attractive town square or Diamond. From the late 17th until the early 20th centuries, Donegal Town formed part of the vast estates of the Gore family (from 1762 Earls of Arran) and it while in their ownership that the town took on its present appearance. Donegal returned two members to the Irish Parliament until the Act of Union (1800). Evidence of the Irish Famine still exists including a workhouse, whose buildings are now part of the local hospital, and a famine grave. 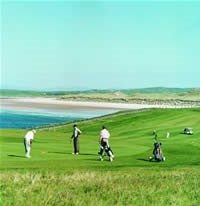 There are many sandy beaches in the area of Donegal boasting good surfing conditions. Donegal is also used as a base for hill-walking in the nearby Bluestack Mountains.  Donegal also has a long tradition of weaving carpets. Donegal Carpets have been made in Killybegs for over one hundred years and have been found in Áras an Uachtaráin, Dublin Castle, the University of Notre Dame and the US White House.

Preference cookies are used to keep track of your preferences, e.g. the language you have chosen for the website. Disabling these cookies means that your preferences won't be remembered on your next visit.

We use analytical cookies to help us understand the process that users go through from visiting our website to booking with us. This helps us make informed business decisions and offer the best possible prices.